No gimmicks, no concept, no costumes. My Chemical Romance have binned the overly theatrical elements they have become notorious for over the last decade in favour of something all together more adult. After 2007’s release The Black Parade, Conventional Weapons is a coming of age for the band. With the showmanship being restrained you wouldn’t be misguided to assume that what remained would be bland, boring, perhaps resembling Coldplay. This is the last thing Conventional Weapons is comparable to; It’s an explosion of pure energetically heartfelt rock music.

A blast of vocalist Gerard Way’s emotive voice escapes with fury from Boy Division – “If all my enemies threw a party, would you light the candles?” it’s so punk it feels like a guitar has been smashed into your face. It’s perfectly put together in it’s design. Those first few seconds of the album flawlessly highlight Way’s distinctive voice until the guitars interrupt and steel the limelight. It is hard to believe that initially the band had scraped this grownup album to instead produce the polar opposite comic book fantasy that was 2010’s release Danger Days: The True Lives Of The Fabulous Killjoys. It feels like it took a lot for the band to build up the courage to come to terms with the fact they have actually grown up.

The album is a pick and mix of songs, showcasing the diverse capabilities of the band. Varying from outright punk to gushy love songs and there is even a robotic voice thrown into ‘Tomorrow’s Money’ for good measure. The album is weirdly polished but yet retains an incomparable air of realism. If there’s one thing My Chemical Romance have kept consistent throughout their long career is their talent for unveiling very genuine and heartfelt emotion, unafraid of being persecuted for it. They mean what they are saying and you can feel it. They have lived, breathed and even bleed the pain, the love, the sadness and even the joy expressed in the album.They are master puppets of emotion. 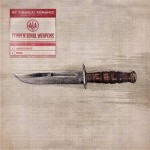 The question that comes to mind is does this album hint at where the future of the band may lie? After running around deserts in leather, masks and muscle cars during the most recent Danger Days era, have the band finally decided to ditch the costumes and concepts for good? Having been together for over a decade it wouldn’t be hard to imagine that the band having run out of creative fuel to possibly dream up any more imaginary concepts like the marching bands, post-apocalyptic future wastelands and Star crossed Lovers? Are they possibly attempting to diversify and escape the ‘Emo’ label they have long been grouped under?

One thing is for sure- even if they are trying to escape form the emotionally burdened music of their previous, the level of authenticity within the album is what makes it special. The World Is Ugly is full of sentiment, a tale of a perfect love in a shattered and flawed world. This dystopian concept is the basic framework of album Danger Days, which was created after Conventional Weapons. This album is pretty much a toned down version in both concept and lyrics. Song Make Room!!! Is pretty much the rejected first version of the bands single Na Na Na released in 2010. The very same lyrics of “Everybody wants to change the world… But no one wants to die” are recited repeatedly within a large section of the song, although not to the same defined constructed outcome. Instead it lingers and struggles on for significantly too 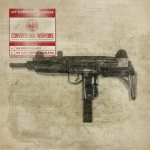 In The Light Behind Your Eyes Despair and longing resonates from every lyric. Remarkably so in the emotionally charged and desperate outburst of “If I could be with you tonight I would sing you to sleep never let them take the light behind your eyes” which tenderly hits an emotive nerve. Surrender The Night also follows the same gritty truth and abysmal feeling of desperation. Ambulance starts with what sounds like an African choir, resembling something out of The Lion King, harmonising alongside the crisp lead vocals. The whole album feels like forbidden pop music. Sinfully catchy yet anything but sugar coated. Yes they are at root a rock band but they do know how to write a killer hook that’s so incredibly pop it gets featured on T.V show Glee.

Conventional Weapons for a long time was the missing piece from the My Chemical Romance puzzle. With work on a new album currently rumoured, perhaps the band are

shedding light on the future direction of their music. Maybe they are deciding it’s finally time to head in a different and more serious direction. The Album is an emotional roller coaster ride taking you up and down more times than a yoyo. The diversity of the songs works to showcase abilities of the band not evident on the previous albums. However the one thing that is missing from this album is the element of exploring the darker aspects of the human condition, of which they do so well. As this may be My Chemical Romances attempt to escape from the ‘emo’ label that has haunted them for years, this exclusion was likely intentional. This change hasn’t excluded depth of emotion at all, so My Chemical Romance are still leaps and bounds away from turning into the new Kasabian.